Giving robots more responsibility to care for people in the twilight of their lives may seem like a dystopian prospect, but many see it as an inevitability. The number of people over 60 will more than double to 2.1 billion by 2050, according to the UN. The figures point to an emerging gap. There simply won’t be enough people for the required health care jobs. Proponents argue new technology must be created to help fill the void.

It may not look like much — more cute toy than futuristic marvel — but this robot is at the center of an experiment in France to change care for elderly patients.

When Zora arrived at this nursing facility an hour outside Paris, a strange thing began happening: Many patients developed an emotional attachment, treating it like a baby, holding and cooing, giving it kisses on the head.

Zora, which can cost up to $18,000, offered companionship in a place where life can be lonely. Families can visit only so much, and staff members are stretched.

Patients at the hospital, called Jouarre, have dementia and other conditions that require round-the-clock care.

The nurse at Jouarre who oversees Zora controls the robot from a laptop. He often stands out of view so patients don’t know it’s him at the controls.

The robot can have a conversation because the nurse types words into a laptop for the robot to speak. Some patients refer to Zora as “she,” others “he.” 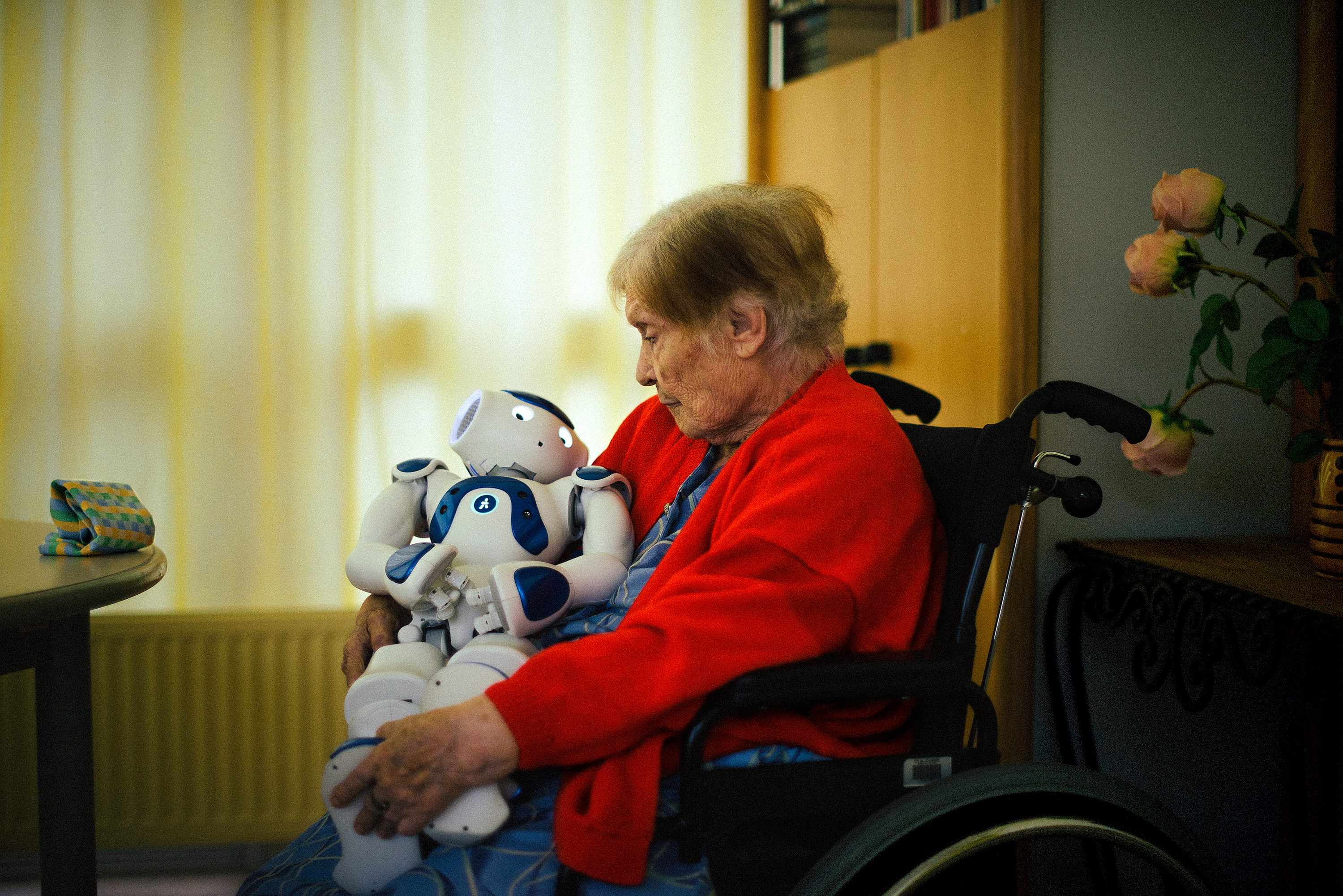 Not everyone is enamored.

Robotics still has a long way to go before there’s a realistic chance of having a humanoid nurse.

Zora doesn’t dispense medicine, take blood pressure or change bedsheets. At Jouarre, Zora was viewed by some as a superfluous tool that just “keeps the patients busy,” according to a nurse, Sophie Riffault.

Another nurse, Nathalie Racine, said she wouldn’t let a robot feed patients even if it could. Humans shouldn’t delegate such intimate moments to machines. “Nothing will ever replace the human touch, the human warmth our patients need,” she said.

The experience at Jouarre provides a window into a future when we will rely more on robots to help care for loved ones as they age.

Zora Bots, the Belgium-based provider of the robot at Jouarre, says it has sold over 1,000 of the robots to health care facilities around the world, including in the United States, Asia and Middle East. It is part of a growing emphasis on robotics focused on care. A robot dog made by Sony has been marketed as a companion for older adults.

“We need to help with loneliness,” said Tommy Deblieck, the co-chief executive of ZoraBots.

Giving robots more responsibility to care for people in the twilight of their lives may seem like a dystopian prospect, but many see it as an inevitability.

In nearly every country, the population of older adults is rising. The number of people over 60 will more than double to 2.1 billion by 2050, according to the United Nations.

The figures point to an emerging gap. There simply won’t be enough people for the required health care jobs. Proponents argue new technology must be created to help fill the void.

The challenge is particularly acute in France, where hospitals have been facing a national crisis, with health care professionals striking and protesting budget cuts and staff shortages. A rise of suicides of nurses and doctors has made national headlines, and France’s health minister acknowledged that the hospital system was “running out of steam.”

The challenge will be creating machines capable of doing more complex jobs. Lifting a patient’s mood with a song is different from providing health care. The French hospital, which bought the robot with the help of a charitable grant, brings out Zora just a few times a month.

In Australia, a hospital using a Zora robot studied the effects on patients and staff. The researchers found that it improved the mood of some patients, and got them more involved in activities, but required significant technical support.

The experience of the French hospital staff has been similar.

Staff members have been continually surprised by how attached patients have become. One nurse, Mickaël Feret, said some patients get jealous of others spending time with Zora.

Patients have told the robot things about their health they wouldn’t share with doctors.

A woman who had bruises on her arms wouldn’t tell hospital staff what had happened, but shared with Zora that she’d fallen out of bed while sleeping.

“It puts some cheerfulness in our lives here,” says Marlène Simon, 70, who underwent a tracheotomy and has been in the hospital for more than a year. “We love her, and I miss her when I don’t see her. I actually think about her quite often.”

When we visited Jouarre in late August, it had been a long day for Zora.

The machine visited individual patients in the morning, and then was needed to help with group exercises and other areas later in the day.

Eventually it was put away in the small suitcase where it lives at night, stored away inside a closet in the secretary’s office.

The battery had run out.